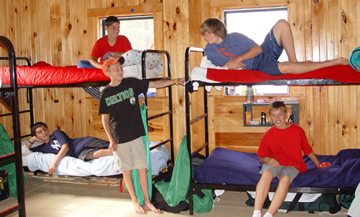 George had a fabulous summer at OATKA, he has not stopped talking about OATKA since we left, and has already lined up his activity choices for next summer. Mark and I are so pleased with the positive impact his experience has had on him in every way. We thank you and the staff at OATKA for helping make his first time away from home so wonderful, successful and memorable. We hope to be able to provide him with many more summers of the whole camp experience. Thank you.

I so deeply appreciate my son having had the opportunity to come to such a wonderful camp with your very generous scholarship for the past four summers. I was drawn to the Camp O-AT-KA Web Site when I first began researching camps in the late winter of 2005 because your Mission Statement really resonated with me. The accompanying photos of happy boys, rustic and charming lake front buildings, including St. Andrew’s Chapel, greatly impressed me. At that time I was thinking about sending my son away from home for the first time. Positive male mentoring was at the forefront of my mind since I am a single parent. Later that spring I was so excited and happy for my son when I learned he would be able to go to this special place for a whole month in the summer of 2005.

Four years later I am still in awe of Camp O-AT-KA, but from the perspective of a grateful parent whose son has had the benefit of your moral grounding of campers, which I hope will serve him well throughout life. This ethical environment Camp O-AT-KA provides as part of your overall program – with moral teaching built seamlessly into daily activities – has been invaluable for building my son’s character.

The memories that our son has of camp, plus the skills he has learned, will be with him for life, and the independence that he gains every summer by taking care of himself for a few weeks helps him all year as he manages his school and extracurricular activities.

“O-AT-KA is somewhere I feel safe.”
The staff helped me to take away my home-sickness when I first arrived. The counselors and staff taught me a lot ad have given me strength to do things I never thought I could do. I have learned skills in baseball and built confidence to go in the water. I now have strong swimming skills.

“O-AT-KA feels like a nice big community and everyone is very welcoming.”
The staff and counselors are nice and patient. I Love the setting, the lake and the mountains. O-AT-KA offers many activities and enables you to try new things. I like the large size of camp. You can move around and have a sense of freedom.

“O-AT-KA feels like a second home.”
I started at seven and have been a camper for ten years! Everyone is welcoming and cares about each other. The Galahad Program teaches morals and values you can use throughout your life. It is a positive influence on camp life.

When I think back to my younger years there is one experience that outweighs all others, the experience of attending Camp O-AT-KA. I was very fortunate to go to Camp O-At-KA and 2010 saw me relive those younger years. I attended the Green and Gray Ball in January which brought back so many memories. Then there was the work weekend in May. What a thrill it was to actually step foot back on the campgrounds again after over 30 years! Everything was just as I remembered.

I took a walk through Great Hall and saw, among new canoes and kayaks, the Town Class boats I used to sail. Then I walked to the rifle range where the memories of me taking aim in the prone position were so fresh and clear. It was great to let it all in again. Of course there is a reason it is called ‘work weekend’. So off to make a tent platform at Green Ridge, a retainer wall behind a junior ball field dugout, replace cabin roofs and construct a new walkway in the middle unit. Harwick, my old cabin, looks so nice with a new roof. An exciting weekend meeting new people and seeing those I knew (Rufus Ward, Danny Berndt, Tom McMullin…). I was unable to attend Dennen Week or Friends weekend this year due to work/schedule conflicts but hope to attend at least one next year. I urge all former campers to do as I did this year: get reacquainted with Camp O-AT-KA, I’m glad I did. See you all at the 2nd annual Green and Gray Ball.

Eleven years ago I arrived at Camp O-AT-KA apprehensive, and doubting my decision to attend an overnight camp. However, no more than five minutes after my parents left, I was whisked away by a group of campers to go play soccer on the Junior Ball Field, and an hour later I was covered in soap attempting to beat my counselor in a water slide race. My angst quickly escaped me. I loved camp so much my first year, I wrote my parents a letter pleading with them to allow me to stay another three weeks. When they arrived to pick me up, I broke down into tears because I did not want to leave. Ever since, camp has become my second home.

One of my favorite parts about camp is the wide spectrum of activities. During my seven years as a camper I participated in activities such as tennis, soccer, and boating, but also activities that I could not take part in outside of camp such as photography, stain glass, and racing sailing. I tried sailing eight years ago, and now I am a racing sailing instructor. The instructors in the activities have a profound knowledge of the activity, but more importantly they have passion and zeal.

However, from my perspective the best part of camp is the people. The diversity of the counselors and campers creates an amicable atmosphere that is ubiquitous throughout camp. Living in a cabin is a unique experience, which allows one to learn about various cultures, develop independence, and truly find one’s own identity. It is amazing how within just three days of being in a cabin, one feels as if he is already friends with everyone. One of the most rewarding parts of camp is the long lasting friendships that are made at camp. Without doubt some of my best friends are from O-AT-KA. Although one does not have the opportunity to see ones friends throughout the year, it makes arriving at camp exciting, and the three, four, or seven weeks of camp that much better.

My favorite moment at camp was the day our sailing instructor told us we could attempt to sail across Lake Sebago, which is an impossible task to complete in one 55minute period- but he still managed to instill confidence in us that the task could be completed. It was one of the final days of sailing, and it was an opportunity for us to implement everything we had learned during the session. We embarked on our journey to the other side, and unfortunately we never made it. However, we had so much fun on our boat, talking about memories from camp, and also about life at home. We also were allowed to sail freely in near perfect conditions, while still being monitored by a counselor.

Eleven years later I still find myself returning to camp year after year. I have been a camper, a C.I.T., and now I am a counselor. People always ask, “Don’t you want to do something else with your summer?” I immediately answer with a fervent, “No”. Camp fosters such a comforting atmosphere that, everyday I am not at camp I am longing to be there, and every day I am at camp I regret the day I have to leave.