Connections – Generations apart but linked by a common spirit 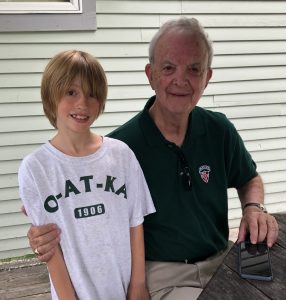 It’s a small world, and this is a phrase that we are not lacking here at Camp O-AT-KA. With such a rich history and an ever-growing community, camp connections are happening every day both inside and outside of the camp environment. There is something truly special and important about these connections made that come in many different styles and occasions. We are excited to begin sharing more of those small world stories with you here.

It was a beautiful, summer day in August (just after the 2019 camp season had ended). Situated in the Village of Cotuit, MA on Cape Cod, Cotuit resident and O-AT-KA alum Larry Mariner (camper in the 1950s) happened to share a table with Liz Haenle, mother of current junior unit camper Thomas Haenle at the Cotuit Market, or better known as ‘The Coop.’ After introductions, Mariner and Haenle quickly and pleasantly made the connection that that they were both part of the Camp O-AT-KA family.

Haenle and her family were just days away from traveling back to their winter and work-based home in Beijing, China.  Given that Thomas had just left camp and was suffering from what we in the camp community call “camp-sickness,” Haenle was keen to ask Mariner if he would be willing to meet with Thomas again so that they could share and compare their camp experiences.

“Saying ‘yes’ was one of the easiest responses I’ve ever had the opportunity to express…I treasure the opportunities to meet the younger generation of current or recent campers and to engage in sharing our past and present perspectives,” said Mariner.

On the day that Mariner and Thomas met back at the Coop, they shared a table spread full of old and new photos from camp as well as Mariner’s old song sheet. Mariner wanted to give Thomas a chance to elaborate on his personal camp experiences first.

“As Thomas talked about the life and routine of modern day campers, what he said simply gave me points to indicate comparisons, such as how we earned chevrons, the dining hall routine, the camp store, how laundry was done, what a great baseball program and teams we had, the woodshop and other crafts (many more now than then), chapel, learning to dive, whaleboats, the great sailing fleet we had, Big Ben, the legend of the Safety Pin. For 45 minutes, Thomas gained confidence, poise, expression and enthusiasm getting to tell me what he liked and loved,” said Mariner.

When asked about his meeting with Larry, Thomas was eager to share the following:

“I felt very happy to meet Mr. Larry. I especially liked reviewing the old O-AT-KA song sheet with him and talking about songs he sang in the early 1950s and about the songs we sing now. I showed him a video of us singing on our last day at camp this summer, and I think he really liked it.”

When it was Larry’s turn to share his experiences, all he had to do was take Thomas’ stories and elaborate on them while weaving in a couple of extra details that were unique to his time.

“The key for me was Thomas’ interest and enthusiasm in hearing what camp was like during my few years there,” said Mariner.

“Looking ahead, and assuming Thomas will be back for a few weeks [next summer], I now have an added incentive to return while camp is in session. Maybe even to participate or lead the campers in singing ‘Great Big Lake Sebago is a lake way down in Maine, to describe it you could never try…’ or something reasonably close to those words,” said Mariner.