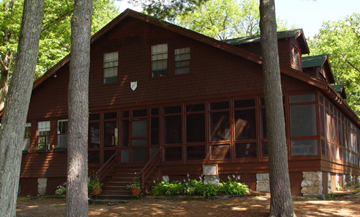 The most important consideration in choosing a camp is its safe environment and qualified staff. At O-AT-KA we understand this and have worked hard to build a strong leadership staff.

With decades of camp expertise, our leadership staff strives to provide a caring, supportive and safe environment for every camper. The boys at Camp O-AT-KA are supported and nurtured, as well as challenged and held to a high standard. Accomplishing both of these together is a skill we have refined over decades of guiding boys on their path to being men.

Camp O-AT-KA enjoys a healthy diversity in the backgrounds of our staff. Just like the boys that spend their summers here, our staff come from all over the nation, as well as foreign countries.

Read on to learn more about our leadership staff, and to hear what parents have to say about our boy’s summer camp. 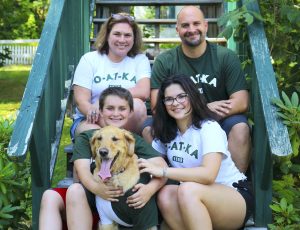 Heather Plati joined the O-AT-KA staff in 2015 as the first full-time Director of Advancement and became the Executive Director in June of 2017. From the time she joined the O-AT-KA family, her focus on fundraising, as well as bringing alumni and parents together for events, communications, and volunteer opportunities translated seamlessly in the area of enrollment, staff development, and executing a long-term strategic vision for O-AT-KA. Before joining O-AT-KA, Heather was in various fundraising and public relations positions at Simmons College, Bentley University and Saint Joseph’s College of Maine. She sits on the American Camp Association (ACA), New England Board of Directors as a Vice President and leads the Fund Development committee.  Heather holds a BS in Marketing from Bentley University.

Heather and her husband Josh, who is also part of the O-AT-KA staff, spend the off-season in Windham, Maine. Their two children, Molly and Nate, have grown up at camp! Nate started as a camper in 2017 and Molly assists in the summer office, theatre program, and with social media.  The family’s golden retriever, Jovi, keeps busy as a the camp dog by cuddling homesick campers and chasing endless amounts of tennis balls. 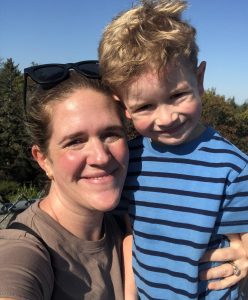 Annie Bowe joined O-AT-KA in 2016. In her role, she helps manage the camp’s various marketing & communication efforts including the camp’s social media, website, advertising as well as camper recruitment, retention and development. Annie previously worked in the Advancement department at Saint Joseph’s College and has experience working in development, alumni relations, and event management.

Annie developed a love for camp as a longtime camper and counselor at Chimney Corners Camp in Becket, Massachusetts. She earned a Bachelor’s degree in Studio Art at Connecticut College and continues to pursue her passion for art when time allows. Annie, her husband Josh, and their two children Sawyer and Elizabeth live right in Sebago! 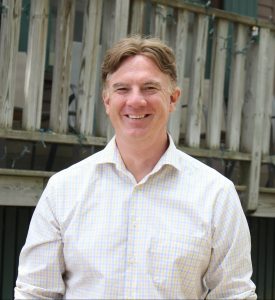 Chris Kohl has worked at Camp O-AT-KA since 2001 in various roles including the Athletic Director, Program Director, Senior Unit Head and the Staffing Coordinator. Chris became the Summer Director in 2022. When not at camp Chris is the Chair of the Wellness Department, assistant boys tennis coach, and a title-winning women’s soccer coach at Thornton Academy in Maine. He is an undergraduate of Gettysburg College, and has earned both a Masters and Doctoral degree from Springfield College. 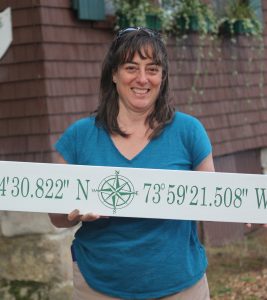 Karina joined the camp staff in 2018 as the Summer Office Manager and now serves in the role of Program Director. As a long time supporter of camp through her involvement in work weekends, on the Centennial and Friends Weekend Committees, and as a member of the corporation, Karina looks forward to serving camp in a role that directly impacts the development of boys.

Karina is a graduate of the University of Southern Maine with a degree in Music Education. She teaches beginning instrumental music in the Bonny Eagle School District and is the past president and a member of the Casco Bay Wind Symphony. Karina is also a life member of the Girl Scouts having served as a leader of troops as well as a regional coordinator for events and adult training.

When not at camp or in school, Karina enjoys hiking, gardening, and, in her daughter, Erika’s words, “Learning new things.” 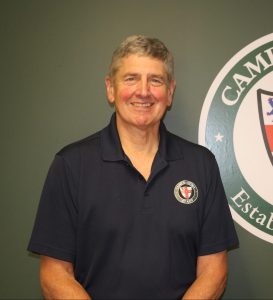 After graduation from Penn State University in 1972, Stu went to work for Johnson & Johnson and spent his entire career in the health care industry. His responsibilities over the 40+ years that followed included virtually all aspects of business operations at both Fortune 100 companies as well as two Boston-area start-ups.

Stu attended Camp O-AT-KA as a camper from 1959 through 1965. He and his wife Anne live in Newbury, MA, and he became involved with O-AT-KA once again when his son, Bailey, began his camp career in 1996. Stu became a member of the Corporation in the late 1990s and subsequently served on the Board of Directors. 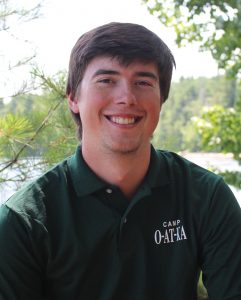 Andrew Nickerson, from Worcester, Massachusetts, returns to camp for his 16th summer. Camp has been a huge part of Andrew’s life since he was very little – Andrew was baptised in St. Andrew’s Chapel! He has spent nearly every summer of his life as an O-AT-KA camper, counselor, Dennen Week volunteer, CIT Director, and now Unit Head. As a recent graduate from Clark University in Psychology and Education, Andrew is very excited to continue his studies at Worcester State University this fall working on an Ed.S. in School Psychology. Andrew is thrilled that he gets to spend his summer on Sebago Lake working with campers and staff to create a fun and successful summer. Andrew’s favorite activities at camp include: campcraft, boating, swimming, and “the best craft at camp: track.” 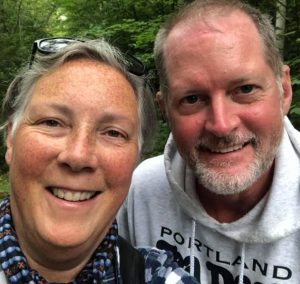 Roy Heller has been at Camp O-AT-KA since 2007. He is the Chaplain in charge of Sunday services in our camp chapel. Roy is a great resource for all of our staff with interpersonal relationships. Roy is also the guidance and organization of the Order of Sir Galahad. The Heller family has been greatly involved at Camp. Roy’s wife, Amy, has worked at camp alongside Roy and with their son, Noah, who is a cabin counselor. Their daughter Annie has also grown up here at O-AT-KA. Roy and his family live in Dallas, Texas where Roy is on the   faculty of Southern Methodist University and teaches the Old Testament. 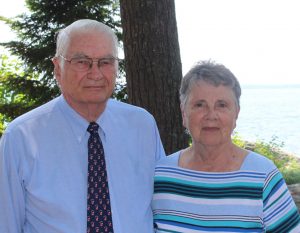 Bob Courtney has spent more than 50 summers at Camp O-AT-KA. He joined the staff as a Junior Unit counselor and has held numerous positions including Unit Head, Head of Work Crew, Head of Commons, and now Service Master. Bob is a retired Head of the Math Department at Baker University in Kansas. Bob’s wife Marlene, a retired high school Home Economics teacher, has been at camp almost as long as Bob. Bob and Marlene have spent many years working to keep the facilities at camp running smoothly. 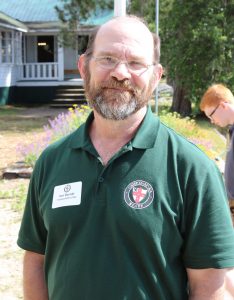 Ken Berndt, great grandson of founder E.J. Dennen, has been involved with camp all of his life. A few of the many positions he has held are Counselor, Head of the Waterfront, Head of the Commons, Program Director, Director of Knights Cove, Caretaker and now Facilities Manager. Ken is the right-hand man of camp and spends four seasons tending to the maintenance and preservation of the buildings and campus.